The immediate build up to the event was all about the ominous and grim weather reports : was it going to be Alive and V Boggy? Would the event be cancelled like just about every VW Show this year? As we arrived at the site on Friday the omens were not good, but we managed to get the new awning up despite the massive gale blowing outside (No offence to Gale, she's a lovely girl really)
Jimmys Farm is located on the highest point of the Orwell Valley outside Ipswich, which made for great views but made the wind even more ferocious. The first night on site i left my Nephew to go out and party whilst i settled into our new home for the weekend with a good read and chilled Guinness from the fridge. The bus rocked in the wind like i was in a boat, but it was wonderfully cosy and snug and i soon conked out to the sounds of some sweet dub playing out of the bus sound system (Preferable to the Kings Of Leon cover versions being played by the band in the Marquee, sorry not realy rocking my boat guys)

Because we could actually see the site from our house, my preparation was a little 'half cocked' for the event, so here is a list of what i wish i had brought along in the first place, and couldn't be arsed to drive out and fetch once we arrived :

1. Food. Veggie food options were limited from on site caterers and so was cash to pay for it.
2. Utensils to cook the food we did bring.
3. An extra sleeping bag, for when we had to put up extra people on the Saturday night. Guess who got to sleep under the dog blanket from the back of the car?
4. Some more Guinness.
5. My hairbrush (Even more bad hair days than usual)
6.More Guinness.
7. My new fire pit that i picked up the day before the event.

Saturday turned out to be much better weather and by Sunday it was truly glorious and my bare, ghostly white chest even went on display as i ate breakfast on the Sunday morning (No pics of this I'm afraid ladies, this is not that sort of website)

It was great meeting old and new friends alike, it was cool meeting Barbara's old owners from Essex who now own a really cool Karman Gypsy (A big version of the T25, and quite rare) They were so pleased to see 'Shelia'(Their name for her) again, and if the bus had a soul it must have felt very loved that day.

Well enough of my blithering, it was a great weekend and here are some more pics that capture the flavour of the event : 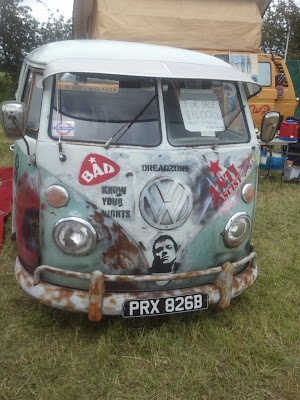 Posted by Blessed Love Studios at 12:24