This was our first proper camping expedition in Barbara since I spent a night alone in her on a windswept moor outside Bradford on my 41st birthday last November (I will leave that particular tale just hanging there for now.....) I decided to choose The Orchard Campsite outside the cutesy Suffolk market town of Wickham Market for her first proper test as its about twenty minutes from our house and is one of the few sites in Suffolk that allows open fires.

On arriving it was obvious the site is popular as it was nearly full but did not feel crammed or cramped. Other campers told us the owners don't like to overfill it and it is often closed for bookings when there is still space they could cram punters into. Genorous and gently sloping site dotted with mature fruit tree's (in blossom and looking lovely) and large ponds and good facilities.

It was clear this place is popular with the VW camper crew as there were two other early bays, a Brazilian bay and several  T25's and T5's. Straight away we realised that having a camper on a campsite is like being campsite royalty as Carl, owner of one of the aforementioned bays, came over to say hello and we hit it off straight away. (Carl's bus is the all Burgundy bus in the foreground of the pic at the top of the page)and we got instant access to their more established and better equipped 'enclave' and ready lit fire and luxury gazebo's and awnings. 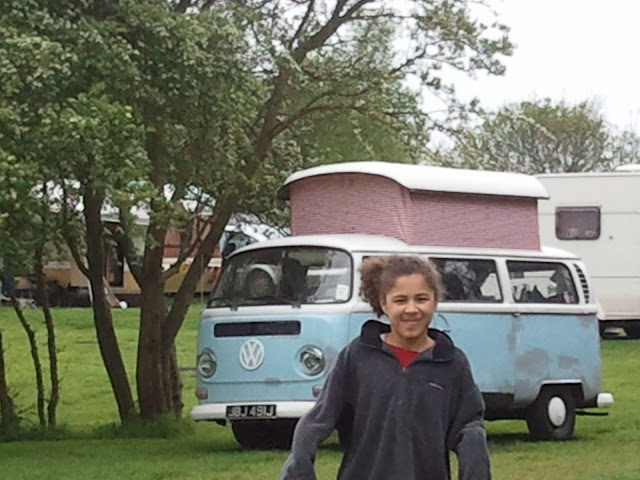 On the negative side, our stay coincided with a football match  involving a certain West London team of over payed and privileged aledged adulatorating lumps (cryptic clue) and a team from Germany. It was broadcast on a large flat screen outside the wash areas and although the TV was not loud, the boorish group of blue shirted adults and their bored and fed up progeny were very loud. Oh well, i just went to the bus and pumped a bit of Lee Scratch Perry and decided to give up on putting the awning up and had my fist larger of the night from my mini fridge (Life's not that bad). Meanwhile the little 'un was having a great time in the nightly mosh pit of kids going for free glow bands that were tossed up in the night air by the friendly and warm campsite staff.

That night was great spent around the camp fire of Carl, Rachel, Steve and Denise of the Bootiful V Dubbers club (That's right, its in Norfolk, but there eye brows were separated and everything! ) Lovely people who played some very cool tunes out of their equally cool early bays. Definitely going to the White Noise VW event in Norfolk now on their recommendation. They really liked the site but were only annoyed like us that the owners do not allow you to bring your own firewood. Shame I had half a tree and an axe in the back of the bus, although some of it might of got accidental 'singed' towards the end of the night on our friends fire. (Hope this doesn't get me banned)
Posted by Blessed Love Studios at 23:30