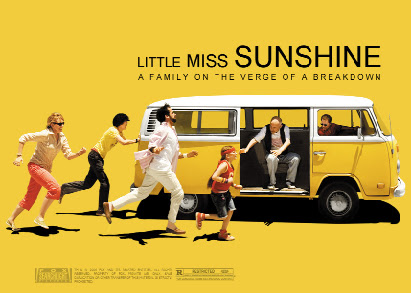 When i came back from Blockbusters with this at the weekend my partner was shocked that i brought back the DVD 'Little Miss Sunshine', a complex family/road drama with no space ships or car chases, however on realising one of its main features is the families clapped out VW bus it all became clear.
I won't go into a long drawn out review here, but this was very enjoyable, funny and moving film that seemed to me an American take on the Mike Leigh school of character lead, darkly funny and thought provoking film making with a lack of the usual 'shmaltz' you would find in a typical American film about family life with a healthy dose of UK style cynicism and dysfunction.


Any way enough of the Mark Kamode style film criticism : what about the bus?  Well it is a character itself in this film and certainly won't help the T2's reputation for reliability as its as dysfunctional, cranky and on the verge of complete breakdown as the rest of the cast. In one key scene in the buses 800mile journey across the states it breaks down in the middle of nowhereville. A local 'hick' mechanic confirms the clutch has broken and issues the time honoured 'we don't have the parts for these old buses...i could order one for next week' but adds that the bus really does not need a clutch for third and forth gears and as long as you start on a hill and get off in third they can continue their journey. As the family are in a flat as a pancake desert environment they have to push the bus to the required speed and then run into the side passenger door every time they continue their journey. The bus gets some real punishment towards the climax of the film but eventually comes up trumps.

I don't watch much TV, but it seems like every time i turn it on recently there is a bus, typically in the background and often used in glossy adverts as some kind of metaphor for 'cool'. The old VW is definitely part of the zeitgeist at the moment and has probably been so for a while, but its my impression that its 'star is rising' and increasingly its the old bay buses that are appearing, almost as much as the classic split screen buses. If we are going to be on the autistic spectrum about this whole subject; their is a website that catalogues VW buses in movies and TV series ( http://imcdb.org/vehicles_make-Volkswagen_model-Bus.html   ) A quick scan proves its not complete as i saw a bit of the 'Steptoe and Son' Movie the other night which had a Splittie in one scene.(It also does not include 'Little Miss Sunshine') A lot of the movies/TV shows  are European and unfamiliar to me, but i have selected some screen shots of some of the more interesting one below :


Posted by Blessed Love Studios at 20:42